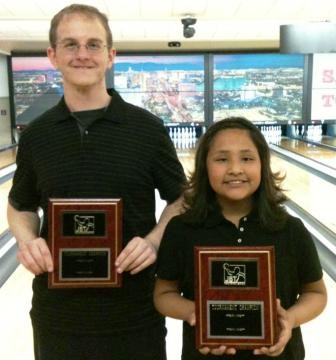 Nick Pollak dominated the scratch division of the qualifying round, throwing an exciting 299 game and leading after all five games.  However, the survivor format can be deadly to runaway leaders, and it claimed another victim as Nick was unable to keep up the momentum in the survivor rounds.  Eventually 20 scratch survivors were carved down to four, and in those semifinal matches Cameron Smith defeated Ian Hanuscin and Zack Hattori ousted Mark Myers to set up a title match clash between two of our most successful veterans.

The title game turned into a carry contest on the Kegel 'middle road' pattern, and this time it was Smith with the edge, firing 11 strikes in a 279-239 win over 11-time winner Hattori (who amazingly, still hasn't won a regular season Mojave event since the 09-10 season).  It's the 33rd title of Smith's career, creeping up towards #3 BJ Baker on our all-time list at 36.

Jason Pappas led the handicap division qualifying round, but also couldn't survive deep into the matchplay rounds.  24 survivors were whittled down to four, and in those semifinal matches, New Mexico's Taylor Simpson beat David Galvan, while Pamela Wright stopped Shelby Dempsey to set up the all-female title match.

Simpson lost the title match last Sunday in Albuquerque, and must have told her family she was ready for revenge immediately, as they made the long trek to Vegas, while Kingman's Wright was appearing in her first title game.  Simpson didn't let last week's result repeat, as this time she won the game 201-179 to earn the first title of her JBT career.

Jory Koizumi earned her fourth Impact Bowling JBT Women's Series title of the season with a 202-170 win over Kayla Goad.  Jory retains the overall women's points lead heading into the home stretch of the season.

Thanks as always to the crew at Sam's Town for hosting our events.  Over $1,800 in scholarships were earned by bowlers of all averages, age 21 and under.  Want in on the fun?  Check out our schedule and come on down to the next JBT event, it's as simple as that!