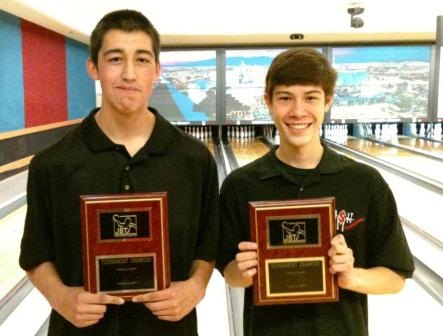 In our dramatic 'march madness' format, bowlers were seeded for the 16-person matchplay based on their all-conference points standings, theoretically saving matches pitting our top stars against each other for the late rounds.  Down to the final four, Oscar Chan, a Californian who won the overnighter in Vegas last month, beat 'Mr. Meme' Curtis Lindeman 212-189.  In the other semi, Hatchett beat defending all-conference Bowler of the Year Riley Dempsey 215-171, setting up the final game.

Both players bowled very well on the challenging 2012 USBC Open pattern in the title game, but in the end it was Eric who came up with the 237-216 win, earning his fifth career JBT title and ending a winless drought since his last handicap title in September 2008.

In the handicap division's final four, Dragovich easily got by Nathan Hanuscin- Nathan had escaped in a tiebreaker against his friend Austin Signoretti in the previous round- while New Mexico's Gerilynn Delagarito squeezed by Californian Marguerite Evans 213-209 to set up the title match.

Seven year-old Delagarito won her first title in Albuquerque in February, and has knocked on the door of a second win a few times since.  However, Dragovich finished off the best day of his JBT career with the win over Gerilynn (although he encouraged her the whole time in a display of sportsmanship that definitely didn't go unnoticed) for the first title of his JBT career.

Courtney Schultz earned her second Impact Bowling JBT Women's Series title of the season with a 198-152 win over Marina Stever.  Courtney needs one more win to qualify for the JBT Girls TPC this July.

Thanks as always to the crew at Sam's Town for hosting our events.  Over $1,800 in scholarships were earned by bowlers of all averages, age 21 and under.  Want in on the fun?  Check out our schedule and come on down to the next JBT event, it's as simple as that!